Travis Frye and Blue Mountain – Living In A Moment

Appalachian Bluegrass with a modern twist.

Travis Frye and Blue Mountain is a multi-generational bluegrass band that honors the Appalachian roots of the music while adding a modern twist. With members spanning from North Carolina to South Carolina, the band incorporates spirited fiddle and banjo tunes along with modern selections from country, bluegrass, and gospel traditions, as well as original material. The band has performed on historic radio and television shows such as The Merry-Go-Round in Mount Airy, North Carolina, the Blueridge Backroads in Galax, Virginia, and PBS’s Song of the Mountains in Marion, Virginia. They have also had the honor of playing for the seventy-fifth anniversary of the Blue Ridge Parkway at Appalachian State University. The band has shared the stage with Big Country Bluegrass, the Steeldrivers, Lou Reid and Carolina, Darin & Brooke Aldridge, Sammy Shelor, and Terry Baucom. Members include Kernersville’s Travelin’ Travis Frye, host for The Afternoon Show on WPAQ radio, on guitar, Hunter Motts of Spartanburg, SC, on banjo, Henry Mabe of Walnut Cove, NC, on fiddle, Mount Airy’s Tim Frye, host of Mountain Morning and Mountain Midday on WPAQ radio, on mandolin, and Renee Martin of Belews Creek, NC on bass. 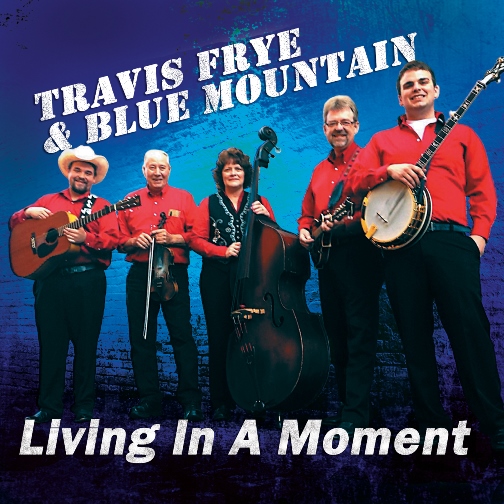 You're viewing: Travis Frye and Blue Mountain – Living In A Moment $10.00
Add to cart