The Lawsons – Shout It from the Highest Hill

Shout It From The Highest Hill is the first CD released by The Lawsons on Kindred, and recorded by Jim Price at the well-known Maggard Sound studios in Big Stone Gap, Virginia.

Kellard and Melva are from Floyd County Kentucky. They have been in show business since they were children. Kellard remembers his mother buying him a mandolin when he was about five years old. When he carried it from the store to the car, it would drag on the sidewalk. Melva was singing not long after she learned to talk. Her mother was always singing, and taught Melva songs, and got her to sing for friends that stopped by. When she was twelve, she decided she wanted to play the guitar. Their grandfathers on both sides played fiddle and banjo, and all their uncles played an instrument. Their dad played harmonica, and all their brothers played instruments. Their mother and sisters sang.

Being the youngest of eight children and having music around all the time, it was only natural that Kellard and Melva would learn to play and sing. Kellard and his brother Ray started having jam sessions at the house with some of their friends, and of course their mother taped them. Ray was twenty and Kellard was fifteen. It was then that their older brother Eugene decided that they should be on the radio, and he got shows on three different radio stations. The group was called, The Spruce Pine Ramblers. All the shows were done live, and had so many people writing in that the radio station gave them their own box. Melva was still in elementary school, but the band needed a girl singer, so she went with them. When Eugene became ill, and Ray got married, that left Kellard and Melva to keep the radio shows going. They stayed on for a while then decided they should do something else. For a while they sang country music at the local jamborees and television stations.

In 1976 they felt that they would be happier doing the music they started with, bluegrass. They cut their first record at LEMCO studios in Lexington, KY. In 1977 Ralph Stanley hired them to play at his festival in McClure, VA., and Bill Monroe hired them to play at Bean Blossom, and at his Rosine festival. During the next few years they worked with and promoted such artists as, Bill Monroe, Ralph Stanley, James Monroe, Lester Flatt, The Dillards, Doc Watson, John Hartford, Jim and Jesse, The Country Gentlemen, Jimmy Martin, Mac Wiseman, and many others.
In the 80s when their mother became ill Kellard and Melva quit the music business. After their parents passed away, their dad in 1990 and their mother in 1995, they were not sure if they wanted to play again. But the love for the music and its people have brought them back, and they are better than ever. The Lawsons do only bluegrass gospel now, with some of the finest harmony you will find anywhere. 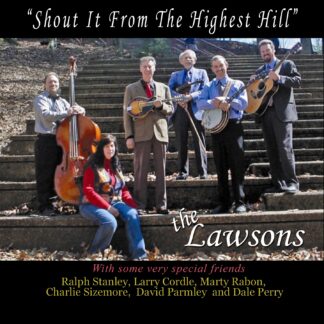 You're viewing: The Lawsons – Shout It from the Highest Hill $10.00
Add to cart